Everything About 3000K LED Street Lights

With the irreversible prominence of LEDs in general lighting and all applications, the color temperature debates were in every field. To gain a different perspective on these discussions, we need to be familiar with some technical issues. RGB, i.e., red, green, and blue, unless you are mixing the color of the light from RGB LED chips, you are most likely doing this: You take the blue LED chip and apply a phosphor to it. The amount and technique of application of this phosphor also determine whether the white color you obtain will be cool white (5000K, 6500K) or warm white (2700K, 3000K). So where do you think the 3500K and 4000K are? Expressions such as natural white are used for these color temperatures, but to simplify the subject, we can define 3500K and above as cool white, and below as warm white. Due to this “technical” constraint, all products marketed for efficiency, especially at first, were cool white products. So let alone 4000K, products such as 5000K and 6500K were marketed for street lighting. This efficiency issue has changed with the speed of development in the sector and now we can easily see a color temperature of 3000K in street lighting. As such the 3000K or 4000K color temperature issue is no longer an efficiency problem.

For a society accustomed to the streets illuminated by metal halide and sodium vapor lamps for years, night and amber colors or let’s say very warm white, 2000K – 2200K color temperatures are concepts that are mentioned together.     When LED technology first came out, the cool white color temperatures, which we encountered with the issue of efficiency, were generally met with a reaction for this reason. This new environment, which is unusually white and contains a lot of blue, was not liked by many city dwellers. Technically speaking the transition from olden lamps with low color rendering (CRI 25) to LEDs with color rendering of at least CRI 79 and CRI 80 has actually given a huge advantage in choosing colors. However, it is not easy to break the habits, the demands are still on the warm white side. 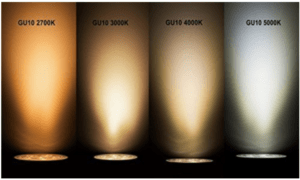 The Sunshine Coast Council also began a smart street lighting pilot project in the Maroochydore City Center with Telensa since September 2018 with the aim to create social, environmental and financial benefits with smart city applications.

The discovery of artificial lighting dates back 150 years. In this sense, the most common thing for people who have lived 12 hours a day and 12 hours a night for thousands of years is actually to benefit from a light source at night which is the moon. Our body, which evolved in this way, responded to these conditions with a cycle of 24 hours called the “Circadian Rhythm”. This cycle is a mechanism managed by hormones since humans are active and hunt during the daytime and rest in sheltered places at night. Humanity prepares itself for sleep, especially with the release of the melatonin hormone at night. The process in which the energy spent during sleep is minimised and the whole body has a chance to renew itself. However, with the discovery of artificial lighting, the researches that the lighting we are exposed to, especially at night, disrupts the circadian rhythm, has been included in our lives again in this century.

This fundamental approach, which has been proven by many studies, is that we should not be exposed to light to continue to secrete the hormone melatonin, which prepares us for sleep, on the contrary, we need to be exposed to little light or to a light source that contains a little bit of blue. Otherwise, we become open to many risks with the body’s inability to renew itself. For example, it has been proven that nurses working the night shift have a 50% higher incidence of breast cancer. All these data, on the basis of 3000K and 4000K comparison, makes the 4000K color temperature disadvantageous with the more blue light it contains. But there is no blue light in 3000K? Yes, there is, but less. For this reason, in some countries such as France, color temperatures of 4000K and above are prohibited for night use.

It has been proven that this unnatural situation has negative effects on the life cycle of many animals as well as humans. While sea turtles are expected to follow the stars and reach the sea as soon as they are born, their heading towards dominant city lights and being the target of hunters or the death of migrating birds by crashing into high plazas are examples that immediately come to our minds. When that is the case, the concept of “turtle-friendly” lighting has become a popular and studied subject, especially in the USA. For all these reasons, the demand for warm white in outdoor lighting is increasing day by day. Therefore, the winner in the 3000K vs. 4000K comparison clearly is 3000K. In fact, even 3000K may be too cold in the future, mark our words.

We use cookies for you to benefit from our website in the most efficient way and for improving your experience on our website. You may see the principles concerning the collection of user data in our Privacy Statement. If you prefer to disable the cookies, you may delete or block the cookies from your browser’s settings.

This website uses cookies to improve your experience while you navigate through the website. Out of these, the cookies that are categorized as necessary are stored on your browser as they are essential for the working of basic functionalities of the website. We also use third-party cookies that help us analyze and understand how you use this website. These cookies will be stored in your browser only with your consent. You also have the option to opt-out of these cookies. But opting out of some of these cookies may affect your browsing experience.
Necessary Always Enabled
Necessary cookies are absolutely essential for the website to function properly. These cookies ensure basic functionalities and security features of the website, anonymously.
Functional
Functional cookies help to perform certain functionalities like sharing the content of the website on social media platforms, collect feedbacks, and other third-party features.
Performance
Performance cookies are used to understand and analyze the key performance indexes of the website which helps in delivering a better user experience for the visitors.
Analytics
Analytical cookies are used to understand how visitors interact with the website. These cookies help provide information on metrics the number of visitors, bounce rate, traffic source, etc.
Advertisement
Advertisement cookies are used to provide visitors with relevant ads and marketing campaigns. These cookies track visitors across websites and collect information to provide customized ads.
Others
Other uncategorized cookies are those that are being analyzed and have not been classified into a category as yet.
SAVE & ACCEPT
Powered by